But Her Emails… – Behind the Music

But Her Emails… – Behind the Music

BUT HER EMAILS… – BEHIND THE MUSIC 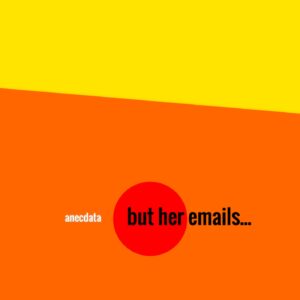 If it’s not clear from the title and album cover, within seconds listeners would hopefully know this is a concept album. It begins with a sample of the infamous ‘grab her by the…’ clip that *should* have ended the 2016 US election, but like many other just-as-horrifying scandals, didn’t do a thing.

The song itself was written – like all the songs on this record – between January 20, when he was inaugurated, and February 17 – when my house got flooded and we had to escape to a hotel for two months.  Like ‘Executive Order’, which comes later in the album, the guitar riff is very much in the style of Muse – not denying that! Just about 100bpm faster. Added some synths to give it a bit of weight and throw it off-kilter, and a rare lead guitar part in the choruses (listen – it’s there, just follows the vocal)… then obscured some of the weaknesses in the singing with a few delays, and there you go.

The choruses are pretty blunt – he lost the popular vote, and had Russian assistance. Not hard to figure that out!

This song began life under the working title ‘Girl U Want’ riff. Not hard to hear why… I recorded a cover of that song last year, and quite liked how it turned out, so understandable that I’d try and write my own version.

But all about Trump. President U Don’t Want.

‘Puppet of the Kremlin’; ‘Orange Anakin’; ‘Nazis in the White House’. There’s a reason I think this track’s an album standout.

There’s a couple of weird key changes you might notice – the first is when I got stuck coming out of each chorus, finding the song a semitone lower than the prior verses – just slid up over a bar, Bob’s your uncle! But when it came to the final string of choruses, the off-kilter feeling the key change brung worked quite well, so it stayed.

As I was putting together the final mix, I felt there was something missing – being more new wave and less grunge, it lacked the ‘bite’ of ‘The Best Words’ – a problem fixed by essentially running the main guitar track through some kind of phaser, and a second version of it digitally distorted and mixed real low. Bit of a Pumpkins/NIN trick.

The vocal was taken directly from the demo – if it ain’t broke, etc.

It fascinates me that there’s a sect on the right-wing of politics that hates everything about governing. Steve Bannon’s entire M.O. appears to be to burn it all down – even more so in the early days of the Trump administration when this album was written, if not now in mid-2017 – just like our old friend Trogdor, the Burninator. So a song was born.

I actually dismissed this song as filler when I first wrote it…but after uploading the demo to (songwriting community) FAWM.org, the positive response meant it made the cut for the album!

Wasn’t entirely sure how to handle the ‘prog’ bit in the middle – bit of fuzz and chorus on the bass, some synth drums and there you go.

If I have to tell you what this song was inspired by, there’s a good chance either you a) never paid attention to the news in early 2017, or b) the sheer firehose of news was just too overwhelming, too much to take in!

It’s about a Nazi who got punched. The song is pro-punching Nazis, for the record. I wouldn’t do it – too weak and all that – but if you think you could get away with it, be my guest.

Big admission time – this song wasn’t actually written about Trump. But the title and lyric fits.

It’s actually about surgically removing an unsightly physical blemish. I wrote it the day before the operation, and bizarrely enough, barely anyone noticed anything had changed afterwards.

There’s a little bit of sampled acoustic guitar in there – but oddly, the only live instrument on the track is the electric guitar. The rest is programmed! It’s like I had Ringo in my computer.

The closest thing on this record to a straight-up ‘protest’ song. Perhaps also the most optimistic, even if it *kind of* advocates assassination. That’s a distant second though – best-case scenario is the titular idiot just goes back to TV.

YOU HAVE BEEN LIED TO

The original mix of this record had a much less fuzzy, heavy guitar sound. That particular tone survived only on this song, which has a lighter, poppier lilt to it.

Trump is an awful liar. His lies are so blatant, it beggars belief people fall for it – but I guess that’s how confirmation bias works!

Then again, some things he said everyone thought were jokes, turned out to be true. Usually the worst things he claimed.

The recording, I kept the acoustic guitars from the original demo, buried them under Minimonsta synths, added some extra oomph in the form of synth snare drums, and there it is.

ARE YOU FEELING STUPID?

A pretty good question for those regretting their vote on November 9. And what self-respecting album about Trump would be complete without references to the infamous piss tape and Twitter, and use of the word “motherfuckers”?

This song wasn’t originally going to make the cut, but the mix came out pretty sweet, so it did. One of the few on this record which features an actual live bass guitar! (Sampling and computers have come a long way…)

Although the lyrics were written with the rest of the songs, the music to ‘Black Site’ dates back to at least 2012. Late last year I found a crude demo dated from the year Obama won re-election that I had no recollection of at all. It became this song.

Might have been playing a little too much XCOM 2: The Long War as well, which might have fed into the title…

New Zealand’s become a bit of a hotspot for rich, right-wing dudes who want to avoid the inevitable apocalypse they’ve created.

Peter Thiel’s case has created months of headlines here, as well as inspiring this song.

This is another go at writing a Beatles/ELO song, if that’s not obvious… but with some added fuzz bass (left channel!) and Gary Numan synths (everywhere, all the time).

‘You fuck’ is perhaps the best lyric on this album. Succinct – like this song. Also perhaps the only song in history to mention philosopher-kings, kazoos, and sticking things up your arse all in the same chorus.

Wasn’t originally going to put this song on the album, but after cutting down the original wordy lyric, thought it came out OK.

Though being generous, it really is a demo for a much superior Smashing Pumpkins recording, eh?

Obviously inspired by the infamously bizarre Kellyanne Conway quote about a nonexistent massacre none of the mainstream media covered, for obvious reasons.

Guns are a shit thing to let the public have, mmkay? I’m not kidding by saying lax gun control is essentially giving people the right to be murderers.

I’m also claiming a first with this song – the first serious song about gun control which mentions McBain.