It’s been a while… here’s a new song.

New song! ‘Tokyo Regret’ is the first song – as in it’s track numero uno on the record – and the first song completed from the next Anecdata album, ‘Battle Thru Time’. Check it out on Spotify, or download (free/pay what you want) from Bandcamp below. The b-side is ‘Arecibo‘. It’s an instrumental, so took minutes to mix because I didn’t have to make my voice fit. Features the LM-1, a squelchy synth, some Polymoog sounds, the world’s fakest handclaps and a weird key change.

And finally, there’s the original demo of ‘Albuquerque‘ so you can imagine how it might have sounded if I hadn’t developed an unhealthy obsession with Prince-style drum sounds in the past few months.

Free download/pay what you want. Tell me what you think! Will be on Spotify, Apple, etc too sometime in the next few days.

Chances are it’s elsewhere too, but those are the big ones.

I’ve also made this little playlist of the best of Kosh Records – ie, me – including songs from Dharma Police and Planet Claire. 15 songs, 43 minutes. Enjoy!

I know, it’s been only months since the last one… but here’s Short Sharp Shocks. A bunch of fast-ish, hard-ish no-frills tunes slathered in distorted guitars, barely scraping the two-minute mark.

Over the years I’ve been doing this, the little songs build up – the ones that don’t make it onto other albums for various reasons often unrelated to their quality. This is a collection of those songs – some old, and some new ones that seemed to fit the bill.

The record kicks off with ‘Just a Car’, which is driven by perhaps one of the first riffs I ever wrote. Next up is ‘Your Money is Mine’, which only came into existence in February – a baby!

Other highlights include ‘Irrelevant’, which takes an alternative view of Star Trek’s Borg species, the grunge-groove of ‘On the Beach’, and ‘Siriscreen’, an old indie-pop song I’ve rewritten about six times over the course of two decades to arrive at this final form.

Listen on the right using Bandcamp – free download/pay what you want. It’ll be on the streaming services very soon.

(And if you haven’t tried it already, my previous album You Do Not Do has only been out four months… it’s different.)

For those people who only listen to music if there’s a video attached, here’s ‘Metronomika’.

Except any of my own, of course!

Alternate title for this post: Albums by old dudes that didn’t completely suck in 2017. Just a generalisation. Not all of them are dudes.

Took me a bit to get into this one. It didn’t help that it dropped the same week my family and I were forced into a hotel after a massive water leak/flood… I know, Prisoner sounds appropriate for six weeks in a sterile room unable to go home… but it just didn’t fit.

It lacks the spontaneity and zest of past Adams efforts, but over time it’s revealed itself to be something of a world unto its own. One of those records that seems impenetrable until you find yourself inside it.

9. Roger Waters – Is This the Life We Really Want?

Speaking of worlds unto their own… On the surface, this is a somewhat lacklustre meshing of Animals,The Wall and Amused to Death – but considering the strength of the source material, even a retread – done tastefully as it mostly is here – can be worth the time.

8. Liam Gallagher – As You Were

The lesser Gallagher’s first proper solo debut wasn’t bad. Had a killer song in ‘Bold’ that was just as good as anything off his brother’s record, the rest sounded pretty much like Beady Eye with a pop sheen. I liked Beady Eye, so no complaints.

Jason Lytle is one of the most consistent songwriters/recording artists of the past 20 years – in terms of quality and style. Any song from Last Place could have been on Fambly Cat, or with a slightly looser production, on Sumday or Sophtware. And even after all this time, that’s a good thing. No one does the fuzz+ELO+melancholy thing like he does.

– Who Built the Moon?

Funnily enough, I know exactly where Noel Gallagher got this album title from. A few years ago, I picked up the book Who Built the Moon? from my local library. Only slightly embarrassed, I took it to the counter – only for the librarian to tell me it was a good read.

I read it on my lunch breaks at work sitting in a park full of mysterious stone circles. I’m not kidding. It has just shy of four stars on Goodreads.

The album won’t quite blow your mind the same way, and I must be the only person who doesn’t really dig the opening track ‘Fort Knox’, but it’s worth it for ‘Holy Mountain’ alone. Who knew a cross between ‘She Bangs’ and ‘Let’s Stick Together’ would even work, let alone be this good?

A bit more pop than before, and now some are comparing her to Prince… in terms of being surface-level pop-appealing yet with unrivalled musical talent and depth to spare… sure. Could have done with a bit more of her freaky guitar work, but even without it, St Vincent is killing it.

I was doing one my occasional ‘has Paul Draper from Mansun done a solo album yet?’ searches when, for the first time in a decade of googling, a positive result! He had! And it was pretty damn good, too.

I know it might seem weird to check if a guy from a B-level fame Britpop band that collapsed in the early ’00s was still in the game… but anyone who was into Mansun back then knows why. There were no other bands like them, particularly on Six. 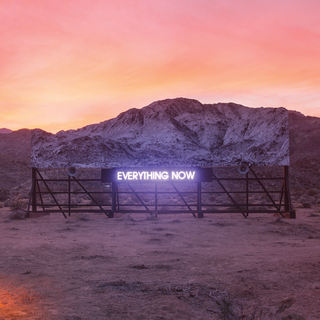 Still wondering if I’m the only person in the world to think this was a return to form after the lacklustre mess that was Reflektor… Even the parts I hated at first – the barely-in-tune Regine vocals, largely – have grown on me. Sure, the double-barrelled title track could have been dropped, and I can understand how some would find many of the lyrics hard to stomach (personally, I’m a fan of the bordering-on-parody style). But from Reflektor, Arcade Fire rebounded nicely.

You could hardly pick a better record title for the former Smiths frontman in 2017. I expected Low in High Places to suck just as hard, if not harder than his awful previous album, which came after a pretty good run stretching back to the early 2000s.

Morrissey is not an easy artist to like, nowadays… but damn, he hits it out of the park here. ‘I Wish You Lonely’, ‘Jacky’s Only Happy When She’s Up on the Stage’, ‘I Bury the Living’ are all great. Even when he gets lyrically dubious – on the awfully titled ‘When You Open Your Legs’ or any of the multiple tracks about Israel – it’s musically fantastic.

I’ve kind of given up trying to figure out what Morrissey actually thinks about… anything. And I was ready to hate this record. But it’s great. I didn’t do a top 10 last year. But in 2015, declared Wolf Alice’s debut album My Love Is Cool the best of the year – and they’ve done it again.

Visions of a Life is, I guess, a variation on that record – they’re not reinventing the wheel – but rather cementing their position as the best rock/alt band on the planet right now.

Tracks like ‘Don’t Delete The Kisses’ and ‘Sky Musings’ are what Sonic Youth would sound like if they were surviving on streaming rations, while ‘Yuk Foo’ and ‘Sadboy’ take the grunge template and shower it in shoegaze.

Some honourable, others not so…

Weezer. For a band who recently apologised for forgetting ‘disco sucks’, they sure lost their memories fast again. For all the hate their mid-2000s stuff gets, Pacific Daydream is a turd beyond any lingering fans could have expected.

Queens of the Stone Age. Villains was good… just not good enough. Mark Ronson might have been the right guy to fix Duran Duran, but he’s the wrong guy for QOTSA, who didn’t really need fixing after …Like Clockwork.

The Foo Fighters, Royal Blood, Blondie, LCD Soundsystem and Goldfrapp all released listenable records this year. I guess. Haven’t listened to a couple that have got my attention yet, like Drunk by Thundercat. And Lorde I guess is great, but just not my thing.

OUT NOW: ANECDATA’S ‘BUT HER EMAILS…’

Entirely written in the first month of Trump’s presidency, ‘But Her Emails…’ is Anecdata’s attempt to bottle the uncertainty and chaos of those first few weeks of the beginning of the end. Before he fired the head of the FBI, before the ‘Russia thing’ got serious, and when punching Nazis was for fun rather than survival, the administration was a goldmine of soundbites and ineptitude – documented here on songs like ‘Bowling Green Massacre’, ‘Executive Order’ and ‘Never Clever Ever’.

Check out the first single, ‘Never Clever Ever’, on YouTube or Spotify.

Here’s the first taste of my upcoming new album, ‘But Her Emails…’ It’s a single called ‘Never Clever Ever’, backed with ‘Are You Feeling Stupid?’

I know I said in the last blog post I’d just be recording every song ever in alphabetical order, but that’s kind of a dumb idea, now that I think of it. Maybe I’ll do one-offs, but for now, I’ve written a whole new record from scratch – and it’s all about Donald Trump. Truly. Don’t believe me? Listen to the two songs above and tell me it’s not!

Pay what you want/free download. Coming to iTunes, Google, Spotify etc very soon. Here’s a lyric video if you like to read words while you listen to music.