Time for track #3 – an itty-bitty song involving a bomb (that’ll make more sense if you actually listen to it).

I wrote this tune in 2011 as a part of the songwriting challenge February Album Writing Month, one of a dozen or so inspired by the TV show ‘Lost’ I penned in just a few weeks. Not sure why it took this long to record it properly… Not going to pretend the lyrics mean anything more significant than basically running through the plot of the latter half of Lost’s fifth season. Insane stuff. 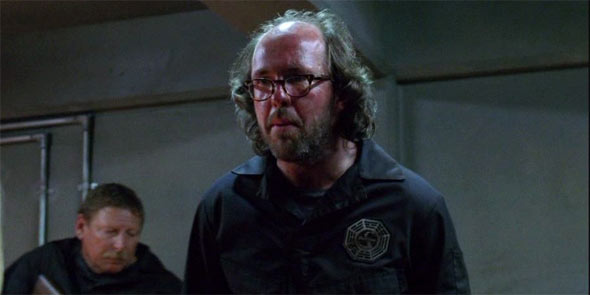 The face of a man who has no time for workplace health and safety rules.

Despite the passage of time, the structure of the song didn’t really change at all between 2011 and now. All the key elements were there in the original demo, I just had to record it properly (not to mention learn how to hit notes…). Added the lead synth to the intro – gotta have a hook! – replaced the piano solo with a guitar, added a choir and a tougher riff in the second pre-chorus, and there it is.

Weird compositional thing about this tune that’s a bit subtle, but the second chorus (the ‘Radzinsky’s in trouble’ part) has a different melody to the first and third. Thought that was interesting. That emerged from part of the lead piano bit in the demo that goes over the second chorus, which didn’t fit when I mixed it with the first chorus melody this time around. It sounds awful in the demo, should have noticed it then, but then again nothing is in tune in that recording, haha!

A Year in the Life Anecdata Anecdotes music recording